Arx Palatina, meant castle-palace, and this was how the Tower of London was sometimes described in the early middle ages. Because, while it was the principal fortress of the realm, it was also a royal residence.

At first the Norman kings occupied the White Tower but from the twelfth century they also had ‘houses’ in the inner bailey. Henry III established the bones of the royal lodgings as they were to exist into the seventeenth century. On the south side of the Tower, on the Thames front, Henry erected two towers, the Wakefield Tower and another on the site of the present lanthorn Tower (present structure is 1776). Adjoining each was a two-story rectangular chamber and between the two was a large aisled great hall. The royal lodgings could be entered directly from landing stages in the river. This symmetrical arrangement was only paralleled in the upper ward at Windsor in terms of symmetry and elegance.

When King Edward I transformed the Tower into a concentric castle by adding a curtain wall round the outside of the earlier one the royal lodgings became separated from the river. In 1275 Edward began a large riverside building containing a new main Watergate and a privy landing stage. In the substantial space above this was a new royal hall and chamber connected by a short gallery to Henry III’s upper chamber in the Wakefield tower. The tower was named St Thomas’s after St. Thomas Becket. The St. Thomas’s Tower lodgings were not used by monarchs for long and by the reign of Edward III the king’s lodgings were in and around the lanthorn Tower.

During the later middle ages the royal lodgings underwent minor improvement and repair but were not changed in substance. The main reason Henry VII visited the tower was to inspect the royal armoury and, in particular, the mint and the treasury. In the summer of 1501 the king instructed Robert Vertue to start work on a new tower built over a new archway approached by an ingenious gallery from the presence chamber. This was not simply a new privy chamber, but a sort of national counting house for accounting for royal treasure. In July 1507 this room, which only had one door, was fitted out with shelves and cupboards for the kings account books and ledgers. Soon after the king commissioned a new jewel house to be built for the safekeeping of his treasure; this was constructed near the great hall close to his own lodgings in the residential inner sanctum of the fortress, a purpose-built strong house for the royal wealth

The Tower held a crucial place in coronations for it was there that the queen spent the night before processing through the city to Westminster Abbey. In 1532 in preparation for the coronation of Anne Boleyn a survey of the fortress called the royal lodgings ‘wonderous foul’. Huge numbers of workmen were mobilised to modernise the king’s rooms and build a whole new wing for the queen. The queen’s watching chamber, the only one to be retained from the old arrangement, was entered from the king’s watching chamber, beyond this was her presence chamber. Then came a long gallery leading to her privy chamber and dining chamber and beyond that four more rooms, presumably including her bedchamber.

Under Queen Mary, Elizabeth was imprisoned in her mother’s rooms, and as a result, developed rather a distaste for the Tower as a residence. Indeed the history of the Tower as a royal palace ends soon after when, in 1603, James I, on his entry into London was the last monarch to stay the night there. 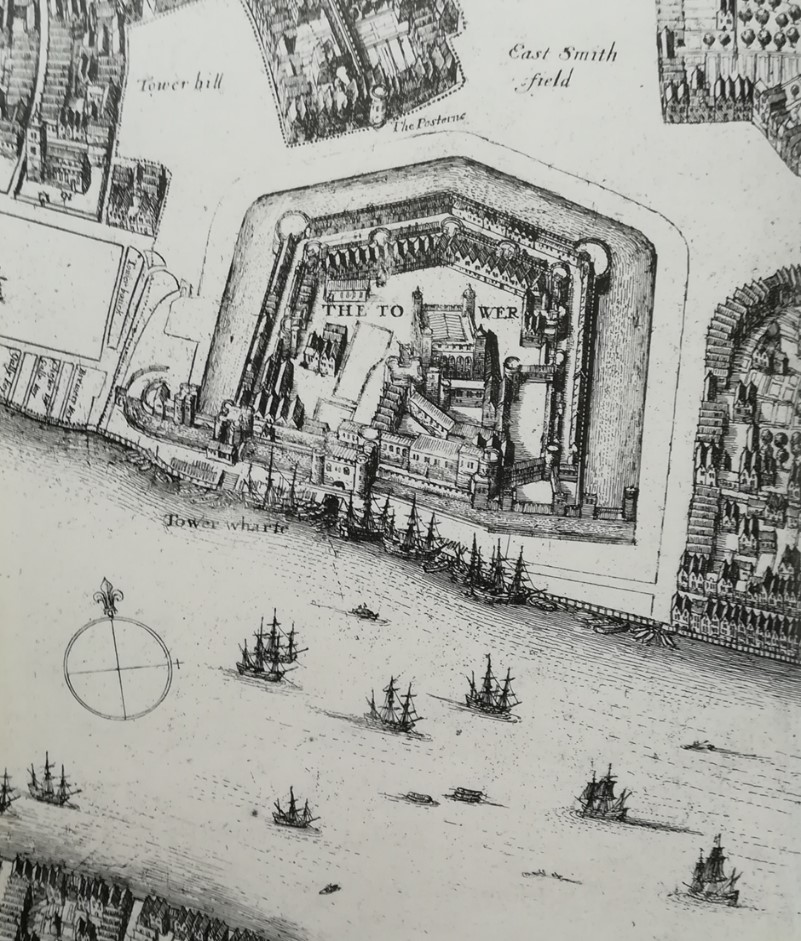