In the autumn of 1604, only just over a year into his reign, King James I decided to found one of the most unlikely and unusual royal residences in the long history of the monarchy. This was a building that posterity has sometimes called Royston Palace, but it looked nothing like a palace of popular imagination; indeed, it was little more than a cluster of houses in the middle of a market town. This unpalatial palace became one of King James’s most favoured residences, the scene of many important events in his reign. Although, during the Commonwealth, the royal residence was abolished and sold, the streets of Royston still contain many of the former royal buildings, enough indeed, to reconstruct this most unusual of royal palaces.

As James I made his way south from Scotland after his accession, he eventually arrived at Royston, sited on the Great North Road some 60 miles from his new capital. He only stayed one night, but the countryside round about, and its potential for hunting, pleased him.

He decided to rent a house there and make it a base. However there were no proper facilities to support the court with all its officials, servants and functionaries and so the king decided to purchase a number of town centre inns and houses to accommodate both couriers and servants.

At first James was content to reside in a converted inn but, in 1607, he ordered the construction of a purpose-built block of privy (or private) lodgings containing a presence chamber and a privy chamber, the two principal rooms needed to conduct formal business. These were still linked to the old inn where the king apparently slept.

James’s ongoing passion for Royston led, in 1609, to a decision to enlarge the privy lodgings and a new brick frontage, one room deep, was built against the 1607 privy lodging in the middle of the street. Over the next few years this was embellished and decorated to become a fashionable brick townhouse with decorated gables, a clock tower crowned by obelisks, handsome cresting over the windows and a fine garden at the rear looking over an ornamental pond.

By 1617 most of the centre of Royston town had been bought up by the king. An inn called the Three Swans was purchased and fitted up for domestic offices; houses on the main road were bought and converted into lodgings for Prince Henry, extensive stables, kennels, and coach houses were constructed, some of which still survive although converted for modern uses. A circular cockpit was built to provide entertainment on days when the king didn’t want to ride out. The Parish Church served as the royal chapel and was partly reconstructed for use by the court, though the king preferred to listen to sermons in the comfort of his presence chamber.

Royston became an ideal hide-away. Here the constrictions of space allowed him to live more privately than in London without fussy ceremonial. He often would arrive with only forty of fifty attendants and only once did the Queen join him – Unlike a normal royal residence there were no rooms assigned for the queen’s use, but there were apartments for his male favourites.

Although Royston was perhaps James I most frequently visited house outside London its charms seem to have been lost on the fastidious Charles I who preferred nearby Newmarket for his sport. He occasionally hunted in the lands round the town but was never a regular visitor. During the Civil War Royston was, for a time, used a strategic base by the Royalists, but after Charles’s execution the royal buildings were surveyed and sold for £517 10s to one Lewis Audley. 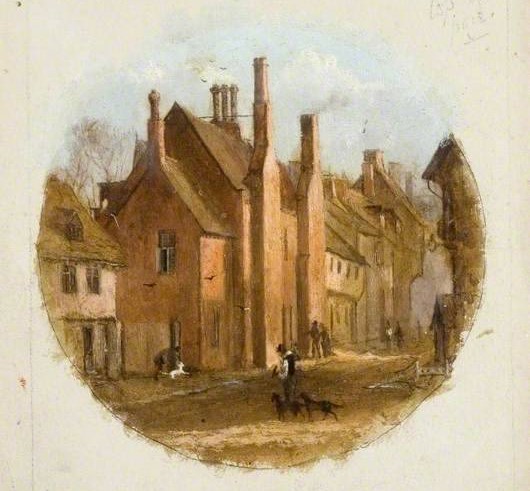