For six hundred years Nottingham Castle was one of the most important royal castles in England. Its position guarding the bridge on the River Trent made it both a convenient, and an important, base for royal power in the midlands used by monarchs regularly until the early sixteenth century.

The defensive works of the castle were extensive covering four baileys: upper, middle, outer and north, but the royal residential part was, at first, in the upper bailey before being extended by Henry II into the middle bailey.

It was all started in 1067/8 as a timber and earthwork fort but, in the reign of Henry II, the timber was replaced by stone and the king built himself a great hall in the middle bailey and a tall stone keep containing the royal chapel in the upper bailey. Next to the keep was a low residential block for the king containing three large chambers and a privy wardrobe and, on the south side of the bailey, was another range for the queen. The royal and service buildings were connected by pentices and the central court was laid out as a garden.

Henry III refurbished and extended the residential parts adding two new towers to the royal lodgings (one for the king and one for the queen) presumably containing smaller chambers and closets. He also modernised the existing lodgings, glazing windows, panelling walls and adding gardrobes. Oriel windows were added to several chambers and the royal chapels magnificently decorated.

By the late fifteenth century the medieval lodgings in the upper ward were very old fashioned and in 1476 King Edward IV commissioned a completely new suite of royal lodgings connected to a tower. This project, costing over £3,000, moved the royal accommodation from the cramped confines of the Norman upper bailey to the more spacious middle bailey where the king’s and queen’s lodgings were disposed against the north curtain wall with very large bay windows facing south. The new tower presumably contained closets and private rooms for the king.

Although Henry VII and VIII briefly visited the castle it was not used as a regular residence and the royal lodgings soon fell into decay. Despite the fact that Charles I raised his standard just outside the castle in August 1642 it was taken and garrisoned by the Parliamentarians and held throughout the Civil War. It was ordered to be slighted in 1651 and its demolition took some five months.

The castle site closed in 2018 for a major development and is due to reopen in 2020 as a heritage visitor centre. 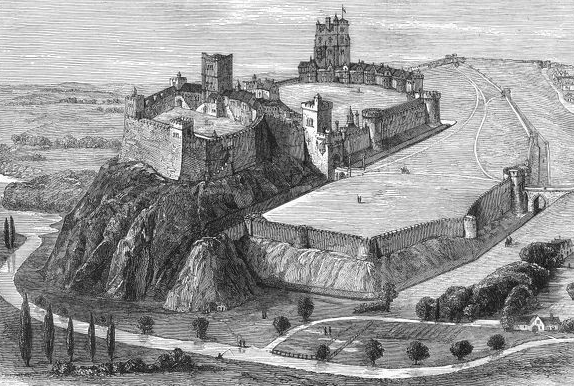