Buckingham Palace is built on a plot of land that King James I laid out as a mulberry garden for silk worms as part of a scheme to produce home grown silk. In the reign of Charles I one of Henrietta Maria’s senior officials created a substantial house there. This was taken over, after the Restoration, by the earl of Arlington. Arlington was Charles II’s longest serving Secretary of State, and arbiter of taste at court, revelling in luxury and novelty in the fine and decorative arts.  Arlington pulled off a coup. The house overlooked St James’s Park which had been laid out by Charles II with avenues and a long canal centred on Whitehall Palace. He built his new house on the axis of this making it seem as if the landscape of the park was focussed on his house.

After Arlington’s death the house passed through several hands before being bought by John Sheffield, Duke of Buckingham, in 1702. He was one of many who admired the location of the house, close to Westminster and dominating the Park. When Queen Anne came to the throne she moved the official seat of the monarchy from Whitehall (which was in ruins after the fire of 1698) to St James’s. St James’s was side-on to the avenues in St James’s park and the Duke’s new house now became the focus of St James’s park and the best-appointed house in Westminster.

It was for this reason that George III wanted it. Somerset House, the official residence of the queen was now not only very old-fashioned, but it was in an unfashionable part of London. The king’s idea was to give the site of Somerset House to the Government in return for the purchase of Buckingham House which would become the queen’s new residence.  After its purchase by the king in 1762 Sir William Chambers re-faced it and added two flanking pavilions creating, not a palace, but an up-to-date gentleman’s villa. Buckingham House now became known as The Queen’s House.

For centuries Sovereigns’ had used the lodgings of their consorts as a way of avoiding the restrictive etiquette of the King’s apartments and George III was only following a long tradition as he increasingly used the queen’s house as his own residence. The King and queen split their time, when in London, between familial informality at their private residence Buckingham House and official and state grandeur at St James’s.  George Prince of Wales was established nearby at Carlton House in a slither of St James’s Park off Pall Mall.

After a long wait to accede to the throne George IV finally became king in 1820 at a time of great national triumph. In the aftermath of the Napoleonic wars, with Britain mastering the oceans and transforming the world economy with its industrial might, there was a sense that the monarch and his palaces should reflect the power and prestige of the state. It was this shift in parliamentary attitude towards royal residences being reflective of the state of the nation that led to public funding for the rebuilding of Buckingham Palace, and Windsor Castle.

In early 1826 George IV decided to abandon Carlton House, strip it of its fittings and embark on the expansion of Buckingham House. The King’s plans were not originally for a palace of state but for what he termed a pied à terre with no suite for a queen or offices for household departments. For a private residence it was an extremely large undertaking, and when the king died in 1830 he was still using St James’s as his London residence. The cost of extending Buckingham House had spiralled upwards and, on George IV’s death, John Nash, its architect, was under investigation for incompetence and mismanagement: the cost of the unfinished building stood at £496,169.

Nash transformed the brick-built queen’s house into a stone-clad national monument and a monument to George IV. He doubled the size of the central block providing a suite of rooms on the garden side. The spine of the house was a ground floor sculpture gallery and a first floor, top lit, picture gallery. The upper, state, rooms were approached by a spectacular staircase. Visitors to this new palace arrived through a triumphal arch (relocated to marble arch in 1850) and through a huge double portico (that survives in the inner courtyard). The interiors were extremely opulent, and highly original, indeed, Nash’s masterpiece. The quality of materials and workmanship were of the highest order. Sadly few remain in their original state.

William IV liked his comfortable apartments at St James’s and was reluctant to move into the vast palace started by his brother, but the sheer momentum of the project meant that it had to be completed. Nash had been sacked and the government appointed Edward Blore as a safe pair of hands to finish the job. He was given £100,000 to do the job. Blore was competent and efficient and completed Nash’s work with skill, economy and control. In 1834 Parliament granted more money for furnishing the new palace. Against all the odds George IV’s dream had been completed by William’s death.

In July 1837 Queen Victoria was the first monarch to live at Buckingham Palace. From this moment it became the centre of the monarch’s official life, of much state ceremonial and most social occasions. This heavy use revealed its inadequacy as the principal seat of the monarchy – something it was never intended to be. In 1845 the queen was already planning to make significant alterations. The architect was to be Blore again and the simple plan was to build a new entrance wing closing the forecourt and creating an internal courtyard. The work was to be funded by the sale of Brighton Pavilion to the town council. The assumption was that the site would be developed for housing so many fittings were removed and installed in the new wing.

Blore’s new wing completed in 1847 was an architectural dud. Worthy, dowdy and boring lacking even a glimmer of the brio of Nash’s facades. But it was cheap, and that was what was wanted. In 1855 a vast new ballroom 123ft by 60ft was completed, designed by Nash’s pupil James Pennethorne. The decoration was executed by Prince Albert’s German artistic advisor who had a huge influence on the palace interiors. Ludwig Gruner was an expert in Renaissance decoration and gave the rooms a gorgeously rich colour scheme.

After Prince Albert’s death in 1861 the use of Buckingham Palace hugely scaled down and by the time the queen died in 1901 the state rooms had barely been used for 40 years. Edward VII immediately commissioned a redecoration. His decorators covered the fantastic polychromatic decoration and created a suite of white and gold interiors. These were the backdrop to an explosion of glamorous court events during Edward’s reign.

After Queen Victoria died it was decided to create a memorial to her and this took the form of a remodelling of The Mall, building Admiralty arch and constructing a huge statue of her outside Buckingham Palace. The culmination of this was the re-fronting of Blore’s new wing in Portland Stone to the designs of Sir Aston Webb.

Soon after the Queen came to the throne she decided to create a public art gallery at Buckingham Palace to show some of the paintings, and other works of art, in her collection. The Private Chapel at the south west corner of the Palace, which had been bombed in 1940, was redesigned as a top lit art gallery which opened to the public in 1962. In 1997 it was decided to rebuild it and a limited competition led to the appointment of John Simpson, an architect who works in the classical style of architecture. He more than trebled the size of the gallery by designing a new £20m building on the site of the old one – opened in 2002 it was the largest addition to Buckingham Palace for 150 years. 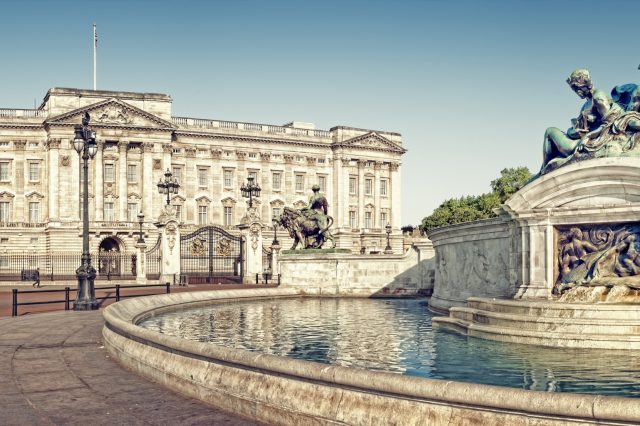